I have several tables in my office. I do have the Accuspina, I have a couple of those Accu-Spina devices.

I will tell you that it’s the device that I absolutely do prefer. Not that the other ones aren’t good, but I’ll tell you what, in my opinion, it is the best.  It gives you so much flexibility so much variability and different things you can do to address each patient as an individuall which they all are.  So I highly highly recommend the Accu-SPINA.

View Video
I’m Dr. Stephen Morgenstern a urologist having practiced urology in Atlanta for now going on 40 years. I’m not being paid for this video nor do I have any interest in the business of the IDD clinic. Now that I have given you a disclaimer I will tell you my experience with IDD.

In 2007 I was injured on a racquetball court and couldn’t get off due to severe pain. I was advised to have surgery. I underwent epidurals, multiple epidurals, and still had pain. My MRI showed severe disc disease from L3 to s1. Bulging discs with significant impingement on the nerves which was causing my pain.

Surgery was recommended, and then recommended again. I wanted to avoid surgery. I was then introduced to the oscillating therapy of IDD. The moment that I started IDD my pain started diminishing. This is now 2019. I have not had surgery. I am out of pain and I owe the success of my treatment and my time enjoying pain-free life to IDD.

I also refer my patients for this therapy. I believe in it. I know it works. it’s worked on my body and it will work on yours

Testimonial, Patient Success Story Transcript from Ansley Colby about IDD Therapy for her back pain.

View Video
IDD Therapy® Patient testimonial. Debilitating back pain successfully treated using IDD Therapy. Patient discusses how she had back issues, but the pain was so debilitating she looked into surgery. An MRI showed 5 bulging discs, but IDD Therapy was all she needed. She avoided surgery thanks to IDD Therapy!

In her own words: I was having excruciating pain. I always had some some back issues because I’ love to run, snowboard and ski, so I sort of always put up with the pain. It got so debilitating that I couldn’t get on bed, I couldn’t travel.

I did massages which helped for about a day; stretched all the time; I did yoga – nothing nothing worked. There were days I couldn’t even tie my shoe. I was looking into having surgery to get rid of the pain and do it fast.

I started doing some research. A friend said before you do surgery, please go visit the IDD Therapy center and I did. Thank God. I came in and I got an x-ray done and when I done I have five bulging discs so it was really bad. It was I guess about four weeks ago I was able to run two blocks. I literally stopped on the street and I was crying and I called Dr. Miller and I said thank you so so much because he told me he said I’m gonna run again, I will get you to run again. I would recommend IDDI therapy to anyone who has chronic back pain. If you have your x-rays and you;re thinking about surgery, please try IDD therapy first. I was there. I almost had surgery, thank God I didn’t

I decided to try IDD Therapy because I’ve gone through several different types of treatment which were more you know manual type – massages and so forth for a herniated disc that I had in my neck. Got some relief but not enough and just kind of did some experimentation on my own to look around and research on Google and heard about this type of treatment so I googled IDD Therapy and that’s how I find the disc and spine center.

I just moved back here from New York City so I was kind of looking for someone in the area and that’s how I found you guys and gave it a shot. Definitely had one doctors say you know you could have the disc replaced and have surgery to do that. They go through the front end neck and I was like I don’t think this is that serious. I mean I was in some pain but not to the extent that I think that could warrant surgery to that degree.

But I learned every doctor kind of knows how to prescribe what they do and so they can do they make your symptoms fit their diagnosis. And so sure I could I could go down that path and it seemed much more risky, but I’m much more trying to do more non-invasive treatments first. so that’s why I came here.

When I first came, it was probably at a pain level of five I’d say out of ten. Through the first few treatments I didn’t see much of a difference, but over time I would say after by about fifteen different treatments, I started noticing that the pain was gradually going away. And and now it’s down to like a 1. if anything. so definitely saw a lot of progress and the staff here was great.
Actually when my my neck was really stiff from kind of tweaking it lifting weights and then I wouldn’t play golf and golf exacerbated the problem – golf was definitely something that aggravated it which was not something that made me very happy. So luckily I’ve gotten to where the pain levels pretty much gone and I can play golf as much as I want. I would say it back to fully doing everything that I was doing prior.

For anyone that’s contemplating going more aggressive into the spectrum and thinking of surgery, I would just strongly recommend to try all the non-invasive – more conservative approaches first. Because surgery is irreversible.

I’m sure there’s many great doctors everywhere that are doing what they can, but I’ve learned firsthand. People that I know that have tried surgeries and it seems like it’s a quick fix but I think the the invasion of the body can be have unknown effects that are hard to mitigate later on. First it’s going more conservative treatment that you actually just try to aid your body into healing itself; and I think that’s what this is kind of therapy does which is just really understanding the problem and then really just helping your body heal itself instead of someone going to the scalpel and trying to correct it with with you know modern practices.

I would always try to err on the side of caution. Ff you exhaust all these options, then maybe you consider it, but I would never do that as a first, second, or third, course of treatment.

I think IDD therapy was great. I had probably 20-plus treatments and my pain is pretty much completely gone – so very happy.

View Video
Overview: Patient Brad Stevens shares the details of his journey as he tried to find relief for his back pain which finally brought him to IDD Therapy… and relief!

His words: I’m doing this testimonial because this machine saved me a ton of medical challenges. Long story short, I’m 38 and ended up having a herniated disc in my lower back causing major nerve pain all the way down my right leg. I mean just tremendous. I went through the list of orthopedics and then they suggest PT, and it didn’t really work. And then going and get these spinal injections, these steroid injections, that kind of relief the inflammation to stop the pain but it just was still not getting better. My only alternative was this surgery where they actually go in and cut part of the the herniation – which is part of your disc. I learned about IDD therapy and this piece of equipment over last couple months. It’s not traction. It’s a machine that very specifically targets and isolates the spine – in this area called L5 in my S1 nerve. It kind of brings the health back to the disc and helps to absorb that herniation so it released that pressure. Getting the surgery – a discectomy, cut cutting off the herniation, it’s gonna create a longer term issue in the other vertebrae in my back. Once you do that there’s scar tissue and you know they say that it’s you know very low reoccurrence but more people have talked to I realized there’s actually a lot of issues you can deal with from surgery longer term. I was able to avoid having to do back surgery by using IDD Therapy.

Doctor Testimonial on success of IDD Therapy for his patients with problems such as sciatica and degenerative disc disease.

Ken5 News segment explaining IDD Therapy and how it is helping patients.

Patients who have exhausted all of those exercises and the heat and the cold packs and those who don’t want to rely on medications now have a new option it’s a therapy called IDD Therapy – which stands for intervertebral disc decompression.

Back pain is so common up to 80% of adults will experience this nagging problem at some point in their lives. Now patients at this clinic are trying out a new FDA approved device called Accu-Spina. Patients are put in a harness and hooked up to a machine that delivers negative pressure to relieve painful disc problems in the back or neck Dr. Bill Tarver is a preventive medicine specialist who oversees the patient’s 20-30 minute sessions over four weeks. He says most see improvement within the first few days. “This machine is beyond physical therapy. No medicine involved, no drugs, and it’s purely mechanical.

During IDD therapy treatment on the Spina machine the targeted damage disc slowly reopens allowing oxygen proteins and other fluids to enter the disc. This causes the discs to rehydrate. This rehydration causes the discs to re-inflate thus easing the spinal impingement and relieving the patient’s pain. Patients are made comfortable by constant heat and massage built into the table. Relaxing music is piped into headphones, despite the tension on their backs many patients actually sleep during their session. “I mean you definitely can feel a tug on it but it doesn’t feel uncomfortable at all.” The machine is designed to help problems from sciatica to degenerative disc disease and Dr. Tarver says other doctors who’ve used it have found great success. 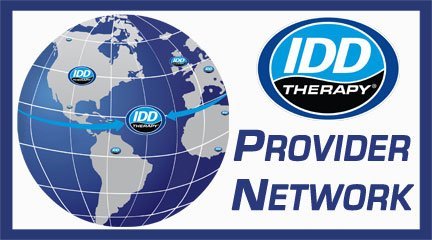 Look for this logo to find a provider in the IDD Therapy® Provider Network.

©2019-2021 North American Medical Corporation | IDDTherapy.com.  All rights reserved.
IDD Therapy® is a registered trademark and may not be reproduced, distributed, or otherwise duplicated, without express written permission.    Privacy Policy

Look for this logo to find a provider in the Disc Clinic Network.

©2019-2021 North American Medical Corporation | IDDTherapy.com.  All rights reserved.
IDD Therapy® is a registered trademark and may not be reproduced, distributed, or otherwise duplicated, without express written permission.    Privacy Policy